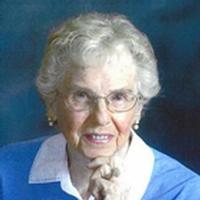 Delores Adeline (Jacobson) Girtz passed away Sunday, April 10, 2016 at Lakeside Health & Rehab Center Pine City, MN at the age of 88. Delores was born to Anton and Dinah (Haug) Jacobson in Rock Creek on March 20, 1928 and shared her childhood years with 9 brothers (Gene, Art, Norval, Stanley, Ole, Otto, Harlan, Raymond and Herbert) and 2 sisters (Mrytle and Alice) grew up on the family farm in Rock Creek. She attended McKay School and Rush City High School. In Delores’ early years after school, she was working at the Grant House in Rush City where she met and later married Sylvester Girtz. Delores and Sylvester loved to travel and took many driving vacations over their 40 years together and once retired they would spend 6 months in their family home in Crystal and in the winter months spending 6 months in sunny Sun City, AZ. Delores loved her family and anytime that was spent with her children, grandchildren and great grandchildren were her joyous moments in time. You never saw her sitting idle, she was either cooking, sewing, knitting, reading, quilting and in her later years she was known as the “puzzle queen”. She loved when her family and friends would just her drop-in to sit and visit. She took great pride in that she moved back to her home town of Pine City in 2004 and lived in her home until a fall brought her to spend the last four years at Lakeside Medical Center where she received such loving care from all of the wonderful staff until her death. She is survived by two daughters Suzanne (Terry) Rothenbacher of Pine City/Minneapolis and Roxanne Butler of Sun City, AZ., three granddaughters Carrie (Jamin) Wood of Princeton, Heather Cote of Sun City, AZ. and Andrea Bongard of New Brighton, three great-grandchildren Jack and Gracie Bongard and Jaeger Wood, sister-in-law June Jacobson of Pine City, aunt Dorothy Ruby of Pine City, many cousins, nieces, nephews and friends. She is preceded in death by her husband Sylvester, son Darwin, daughter Sharon Anne, great granddaughter Lucy Bongard, her parents, 9 brothers, 2 sisters and 1 step-sister. Monsignor Aleksander Suchan will celebrate Mass of Christian Burial for Delores: 10:30 AM Thursday, April 14, 2016 at the Immaculate Conception Catholic Church, Pine City. A time of visitation is planned for one hour prior to the service at the church. Interment will take place at Fort Snelling National Cemetery, Minneapolis, Minnesota on Friday at 11:15 AM. Meet at Assembly Area #4 at 11:05 AM. Funeral arrangements for Delores Girtz are entrusted to the Funeral and Cremation Service, Swanson Chapel, Pine City, Minnesota. www.funeralandcremationservice.com
To order memorial trees or send flowers to the family in memory of Delores Adeline Girtz, please visit our flower store.