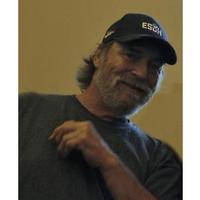 Peter Benoit passed away Friday, August 12, 2016 at his home in Cloverdale, Minnesota at the age of 67. Peter Edwin Benoit was born to Ralph and Elaine Benoit on December 27, 1948 in Minneapolis, Minnesota. Peter was a man of many words. Some of them even g-rated. He was a painter/paper hanger by vocation with Local Painter’s Union #386 just like his Father, Ralph. An avid bow and rifle hunter in his earlier years, John and Tracy would always ask dad when he came home, “Dad, did you catch a deer?” It wasn’t until we were adults that he told us how much he loved to hear that and how it always made him laugh to picture himself literally chasing deer to catch them with his bare hands. He loved his family and friends, dogs, hunting and just being up north in the outdoors. He realized his dream about 15 years ago when he was able to sell his house in the Cities and move to his own place outside of Hinckley, MN. Peter was always a kid at heart and kids loved that about him! At family gatherings, you would find him playing games with all the kids and helping put together the toys they got for Christmas. Peter is survived by his children John (Rachel) Benoit and Tracy Benoit; grandchildren John Subialka, Anna Subialka, Abigail Vela, Anastasia Vela, Brooke Benoit and Lauren Benoit; brother Tom (Santa) Benoit; sisters Mary (Robert) Fenske, Kim (Joe) Henning, Kandy Hainey and Gail Mulcahey; nieces and nephews Brett, Molly, Jessy, Beau, Sheree, Jeremy and Kelli; many great-nieces and great-nephews; uncle Bud (Marvis) Benoit; step-mother Kay Benoit; dear friend Jason Hampey; many other family members and friends. He was preceded in death by his father Ralph Benoit, mother Elaine “Boots” Nedry, brother-in-law Scott Hainey, and beloved dogs: Shelly, Nicki #1 and Nicki #2. A celebration of life for Peter will be held from 5-8:00 PM Wednesday, August 17, 2017 at the Hamel VFW in Hamel, Minnesota. It will be a time to come together to share our love and memories for our dad, brother, uncle and friend. May his memory live on in all of us forever. Arrangements for Peter Benoit are entrusted to the Funeral and Cremation Service of Pine City ~ Swanson Chapel. www.funeralandcremationservice.com
To order memorial trees or send flowers to the family in memory of Peter Edwin Benoit, please visit our flower store.