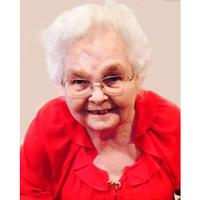 Adina Wicklund of Covenant Village, Golden Valley, formerly of Big Horseshoe Lake, Harris, passed away on Sunday, September 11, 2016 at the age of 85. Adina was born on February 14, 1931 on a farm in Greenland, Manitoba, Canada, one of eleven children born to Isaac and Maria (Ewert) Goertzen. Following high school, Adina attended a Bible College, as well as a normal school. After normal school, she taught for a few years in Canada, than traveled to Hillsboro, Kansas, where she graduated from Tabor College, a Mennonite school. In 1962, Adina was called to teach at an American school in Kinshasa in the Belgian Congo, which was sponsored by the Mennonite Brethren Mission Board. In 1965, Adina married Ken Wicklund and their marriage was blessed with a son and a daughter. After returning from a second term of serving in the Congo, Ken and Adina moved to British Columbia, spending four years working with mentally challenged adults. Then they were off to Japan in 1973 to print Christian literature. In 1979, the family moved to Columbia Heights, later buying a farm in Harris where they enjoyed watching the loons and riding their pontoon on Big Horseshoe Lake. Adina was employed for 20 years at Bethany Covenant Home, eventually becoming administrative assistant. Ken and Adina moved to Covenant Village in Golden Valley, June of 2006. They were very happy there and appreciated the staff as well as the many opportunities for fellowship through the variety of activities. Adina enjoyed crocheting, needle work and good music. She was a volunteer at the Rush City Public Schools, served as a secretary of the Harris Covenant Church as well as being the Sunday Coffee Hour organizer. She also volunteered in the Robbinsdale School system through the sponsorship of Lutheran Social Services. Adina is survived by her husband Ken Wicklund of Golden Valley; son Nathan (Melissa) Wicklund of Blaine; daughter Lisa Wicklund of Minneapolis; granddaughter Elsa Wicklund of Blaine; sisters Martha Rempel of Randolph, Manitoba, Agnes (Helmuth) Klassen and Annie (Cliff) Arlt all of Winnipeg, Manitoba; brothers Cornie (Hilda) Goertzen, Peter (Marilyn) Goertzen all of Winnipeg, Manitoba; sisters in law Margaret Goertzen of Steinbach, Manitoba and Irmagard Goertzen of Winnipeg, Manitoba; many nieces and nephews. She is preceded in death by her parents Isaac and Maria Goertzen; brothers: David, Henry, John (Betty) and Abe Goertzen; brother in law Neil Rempel. Pastor Steve Weihsmann officiated at Adina’s funeral service: 2:00 PM Tuesday, September 13, 2016 at the Harris Covenant Church in Harris with music provided by Jane Erickson and Joellen Friesen. A time of visitation and reviewal took place one hour prior to the service at the church. Adina was interred in the Harris Covenant Cemetery in Harris with the help of the following casket bearers: Nathan Wicklund, Peter Goertzen, Richard Klassen, Randy Carlson, Steve Balfanz and James Friesen. Funeral arrangements for Adina Wicklund are entrusted to the Funeral and Cremation Service of Rush City ~ Olson Chapel. www.funeralandcremationservice.com
To order memorial trees or send flowers to the family in memory of Adina Wicklund, please visit our flower store.