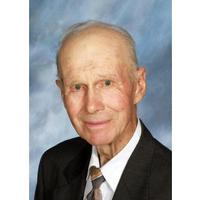 Allan Jarchow of Harris, passed away Tuesday, April 11, 2017 at Ecumen of North Branch at the age of 87. The animals are fed, he’s baled the hay, the chores are complete, it’s the end of the day.  Allan finished his chores and hung up his pitchfork on April 11, 2017. Allan was born on May 31, 1929 to Henry and Florence (Johnson) Jarchow in St. Paul, Minnesota. Allan grew up on the farm in Harris.  He was baptized and confirmed at First Lutheran Church of Harris and was a true believer in the Resurrection of Jesus Christ.  He professed his faith throughout his life.  He was a member in the local chapter of Gideons International as well. In 1947, he graduated from North Branch High School.  After that, he attended Farm School at the U of M in St. Paul.  Farming was Allan’s life long passion.  He started farming as a boy alongside his grandfather Magnus Johnson.  He spent his entire life on the farm milking cows, raising pigs, chickens and beef cattle.  He planted corn, soybeans, small grains and hay. Allan married Betty Hedberg on June 23, 1951 at the English Lutheran Church of Grantsburg, Wisconsin.  They lived on the farm in Harris. They were blessed with one daughter Carolyn Marie. A son, Charles Allan, who passed away as an infant.  Allan and Betty worked side by side on the farm until Betty passed away in May of 1999.  Allan’s grandsons, Jason and Matthew, continued to help their grandpa on the farm.  In the fall of 2014, Allan moved to Ecumen assisted living in North Branch.  He made many friends there and enjoyed playing Bingo.  The century old farm (purchased in 1895 by Allan’s grandfather Magnus Johnson) continues on as a farm with Allan’s daughter Carolyn, husband Glen and his grandchildren. Allan is survived by his daughter and son-in-law Carolyn and Glen Holmstrom of North Branch; grandson Jason (Jaime) Holmstrom; great-granddaughter Shelby Holmstrom; grandson Matthew (LeAnne) Holmstrom; great-grandsons Tyler and Lukas Holmstrom all of Harris; special niece Laura (Lyle) Holmstrom of Harris; and great-niece Elise Holmstrom of Vail, CO; sisters-in-law Gwen Olson of North Branch; Marlys Hedberg of Cushing, WI; Marlene Hedberg of Stillwater; brothers-in-law and sisters-in-law Hartley and Alice Hedberg of Grantsburg, WI, Ray and Barb Hedberg of Spring Lake Park and Charles and Sally Hedberg of St. Louis, MO; many nieces, nephews, cousins and friends. Allan is preceded in death by his parents Henry and Florence Jarchow; wife Betty; infant son Charles Allan; and sister Joan Hoffren. Alleluia!  Christ has Risen!  Alleluia! Reverend Laurie O'Shea will officiate at funeral services; 11 AM Monday (4/17) at the First Evangelical Lutheran Church of Rush City with a time of visitation one hour prior to the service at church.  Music will be provided by Dianne Kirchberg, Jaime Holmstrom, Shelby Holmstrom and Marilyn Schoolmeesters.  Casket bearers will include Jason Holmstrom, Matthew Holmstrom, Glen Holmstrom, Lyle Holmstrom, John Schmidt, and David Ramberg.  Honorary casket bearers are Gideons International.  The funeral luncheon will be provided by the First Lutheran Women of the ELCA.  The interment will take place at Oak Grove Cemetery in Harris.   Funeral arrangements are entrusted to the: Funeral and Cremation Service of Rush City~Olson Chapel. www.FuneralAndCremationService.com
To order memorial trees or send flowers to the family in memory of Allan Herbert Jarchow, please visit our flower store.