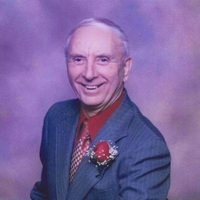 David Nicoll of Pine City and Bentonville, Arkansas, passed away Sunday, September 25, 2022 at his home in Bentonville at the age of 95.

David George Nicoll was born February 16, 1927 to Grant and Alta (Haynes) Nicoll in Hastings, Minnesota. He completed schooling up until the seventh grade.

Dave met the love of his life, Eunice Lee and they were married December 5, 1947. They raised two children Shirley and George on a farm east of Pine City. A few years into family farming a house fire forced them to move to the city limits of Pine City.

David started Nicoll Trucking in 1952 and ran it until retiring in 1973, when he past the business on to his son-in-law Larry Stransky. In 1992, the Pine City Area Chamber of Commerce presented David with the “Farm Business Service to Agriculture” award. While living in Bentonville, Arkansas David met and married Alsion Helbach; they enjoyed 17 years together with family and friends. David also enjoyed, bowling, hunting, playing pool, gardening and traveling.

Funeral services for David: 3 PM; Friday, September 30, 2022 at the First Presbyterian Church in Pine City. A time of visitation and reviewal is planned for 2 hours prior to the service at the church. The interment will take place in Birchwood Cemetery, Pine City.

Funeral arrangements are entrusted to the: Funeral and Cremation Service of Pine City ~ Swanson Chapel
www.FuneralAndCremationService.com

To order memorial trees or send flowers to the family in memory of David George Nicoll, please visit our flower store.