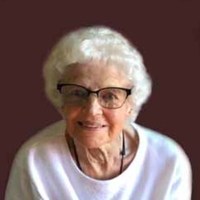 Delores Karas of Rush City died Saturday, September 14, 2019 at Parmly on the Lake in Chisago City at the age of 93.

Delores Pearl Karas was born on July 31, 1926, on a farm 4 miles southeast of Pine City, where she grew up and attended District 30 School through the 8th grade.  She graduated from Pine City High School in 1944, then worked as a receptionist for Lutheran Brotherhood in Minneapolis.  On March 28, 1947, she was married to Donald R. Karas in Chandler, AZ.  After Don’s discharge from the U.S. Army they moved to Rush City where they raised their three sons.

Delores worked for several years at Robinson Hardware in Rush City, when the store closed she went to work at J.B.’s Hardware in Pine City.  Delores enjoyed many hunting and fishing trips to Wyoming and Canada with her family and friends.  She was an avid gardener and especially enjoyed tending her flowers.  Her vegetable garden provided great produce for eating fresh or canning and freezing.  She was also an excellent cook and produced delicious meals for her family every day but especially during the holidays and for other special occasions.  Delores loved spending time with her grandchildren and great-grandchildren attending their birthday parties and keeping up with their school activities.  She had a great sense of humor and showed amazing perseverance overcoming various health challenges during the last years of her life.

An informal service will be held for Delores: 11:30 AM; Wednesday (9/25/19) with a time of visitation one and a half hours prior to the service all at the Olson Funeral Chapel in Rush City.  The interment will take place at 10 AM; Tuesday, October 8, 2019 at the Fort Snelling National Cemetery in Minneapolis.  Before driving to the committal site; we will meet at assembly area #1.

To order memorial trees or send flowers to the family in memory of Delores Pearl Karas, please visit our flower store.