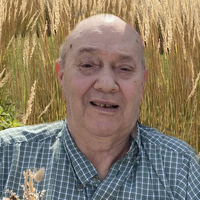 Gary Lee Ausmus was a gentle and loving husband, father, grandfather, great-grandfather, brother and friend to many. He passed away on Thursday, March 3, 2022 at the age of 84.

Gary was born to Fredrick and Alvina Ausmus on August 25, 1937 in Mission Creek Township. He grew up on a dairy farm east of Beroun where he worked alongside his dad. In 1966, Gary took over the farm, which is now in its fourth generation.

He joined the National Guard in 1955. Gary met the person he always referred to as the “love of his life,” Janet Kirchberg, in the winter of 1960 at Pine Camp Ballroom. They married on a snowy day in January of 1962, and celebrated their 60th wedding anniversary on January 27. They had friend groups and neighbors that were active in card playing and dancing.

Five children were born to Gary and Janet: Ronald, Susan, Brenda, Amy, and Michael. They enjoyed many fun family activities and adventures working and playing on the farm together.

After retirement, Gary and Janet passed the farm along to the next generation. They took numerous trips throughout the U.S. and enjoyed many fishing and camping excursions. He so enjoyed family and loved his grandchildren. They had many adventures with their grandchildren, including fishing trips, overnight stays, and newly created traditions that allowed the family to get together regularly. He was thrilled when great-grandchildren started arriving.

Monsignor Aleksander Suchan will celebrate a Mass of Christian Burial for Gary: 11 AM; Tuesday (3/8/2022) at the Immaculate Conception Catholic Church in Pine City.  A time of visitation and reviewal is planned from 5-7 PM; Monday (3/7) with a 6:30 PM Rosary at the Swanson Funeral Chapel in Pine City and also one hour prior to the Mass at the church in the St. Anthony Commons area. Th interment will take place in Calvary Catholic Cemetery, Beroun.

Funeral arrangements are entrusted to the: Funeral and Cremation Service of Pine City, Swanson Chapel.
www.FuneralAndCremationService.com

To order memorial trees or send flowers to the family in memory of Gary Lee Ausmus, please visit our flower store.