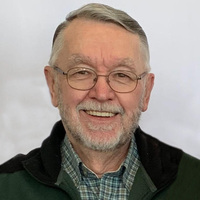 Gary Charles Adolph Miller was born May 24, 1940 to Adolph and Aldred (Bergendahl) Miller in Rush City, Minnesota. He had one sister, Fern, who along with their parents, preceded him in death. He helped his father with farming while attending a "one room" country school. He graduated from Rush City High School in 1957.

Gary loved farming and driving his H Farmall that he kept after the farm was sold. His work career started at the Rush City Feed Mill, the Rush City Co-op followed by Plastech Research in Rush City where he worked for 38 years.

In 1960, Gary married Beryl Bliss. Their children Robbyn; was born in 1963 and Ryan in 1965. After being alone for a time, (we all know Gary loved to be with people) he met Sharon Berglund at Moulton's Rollerdrome in Rush City. They were married December 30, 1972 during an ice/snowstorm. Their children Chad was born in 1974 and Jody in 1976.

Gary was certainly a "people person" and thrived on being with them. If there was someone he didn't know, he would quickly find out who they were, where they were from, and make them feel welcome. It was a gift from God that he used very well in church.

He also used this gift of making people welcome at Timberline Campground in Sturgeon Lake where Sharon and him camped for 40 plus years. In their later years they lived and worked at Timberline all summer, loving the outdoors and the people, plus staying physically active.

His pride and joy was his family. There are so many fishing, camping, hunting, stories and tractor rides that all include his family. He loved talking about his kids, grandkids, and his great-grandson, Walker.

Pastor Tim Adams will officiate at funeral services for Gary: 11 AM; Friday, May 27, 2022 at the Journey North Church in Pine City.  A time of visitation and reviewal is planned from 4-7 PM Thursday (5/26/2022) at the Olson Funeral Chapel in Rush City and also one hour prior to the service at the church.  A private family interment will take place in the Free Mission Cemetery, northwest of Rush City at a later date. The land for the cemetery was donated by Gary’s grandfather. Gary and Sharon have been caretaking this country cemetery for years.

In lieu of flowers, memorials may be directed to Journey North Church or the Free Mission Cemetery.

To order memorial trees or send flowers to the family in memory of Gary Charles Adolph Miller, please visit our flower store.