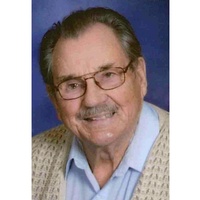 Jim Pangerl of Pine City passed away at Unity Hospital in Fridley on Sunday, March 4, 2018 at the age of 88.

Monsignor Aleksander Suchan will celebrate a Mass of Christian burial for Jim: 10:30 AM; Friday (3/9/18) at Immaculate Conception Catholic Church in Pine City.  A time of visitation and reviewal is planned for Thursday (3/8/18) from 5-7 PM with a prayer service at 7 PM at the Swanson Funeral Chapel in Pine City and also 1 hour prior to the Mass at the church.  The interment with Heath-Perkins American Legion Post # 51, Novak-Milliren VFW Post # 4258, and the MN National Guard providing military funeral honors will take place at Calvary Catholic Cemetery in Pine City.

In lieu of flowers, memorial designations may be directed to St. Mary’s Preschool and DAV (Disabled American Veterans).

To order memorial trees or send flowers to the family in memory of James "Jim" Frederick Pangerl, please visit our flower store.