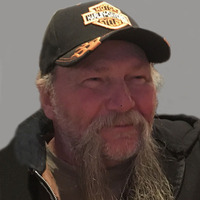 Please click here for a link to John's funeral service

John Norman Ward, 69, died peacefully at home on December 22, 2020 in the arms of his loving wife after a courageous battle with cancer that lasted almost three years.

John was born on September 11, 1951.  He graduated from Pine City High School and attended Pine Technical College for a short time.  On February 14, 1979, he married Pam. John worked for Coca-Cola for over sixteen years and for Team Industries until retirement at 54.

John loved motorcycles and attended Sturgis Bike Rally for 43 years without missing a year. He took many kids on their first Harley ride.

John loved his family very much. He was a kind and generous man, always willing to help anyone.  He also loved the outdoors, wood carving, going to auctions and flea markets and taking Pam traveling anywhere she wanted to go.

Pastor Bob Van Wyck Jr. will officiate at a private family service for John at 11 AM; Thursday, December 31, 2020 at the Swanson Funeral Chapel in Pine City.  The service will be livestreamed for those not in attendance.

To order memorial trees or send flowers to the family in memory of John Norman Ward, please visit our flower store.