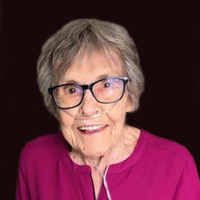 Margarette Louise (Poole) Brooker of Rush City, and more recently Staples, passed away on Friday, August 28, 2020 at the age of 90.

Born on February 8, 1930, in Washington Park, IL, Margarette was the second of seven children born to Guy and Margarette Poole. Margarette’s family moved to Minnesota during World War II, and she graduated from North Branch High School in 1948. After high school, Margarette enrolled at the University of Minnesota while also working as a telephone operator at Northwestern Bell in downtown Minneapolis. When she became ill, however, her money ran out, and she had to quit college.

On May 20, 1950, Margarette married the love of her life, Donald Brooker of North Branch. After serving in the Army in WWII and a stint in the Korean War, Don operated bakeries in North Branch and Hector. In 1958, Don and Margarette moved to Rush City, where they eventually owned and operated Don’s Village Bakery. Money was always tight, but Margarette made her home in Rush City a nice place for her five children and their neighborhood friends and visiting cousins.

The moment she moved to Rush City Margarette became an active community volunteer. The men returning from the war joined the local VFW, so Margarette and many other women in town formed the VFW Auxiliary to do community projects and volunteer work. The local elementary school had a boy scouts program but no girl scouts, so Margarette and other young mothers created a group called “The Fairies” for after-school activities for the girls in town. Margarette loved to read, but the small village library in the early 1960s did not have many new books, was underfunded, and was located above a laundromat, so Margarette and others lobbied the city council for an increased library budget and a space for the library in the new municipal building. In the early 1970s, Margarette and others in the Rush City Women’s Club helped raise the first funds for a city outdoor swimming pool, which was constructed decades later and is today an enjoyment for families throughout the area. In 1973, Rush City celebrated its centennial, and Margarette and a close friend volunteered to co-chair the citywide centennial celebration. They later teamed up again to chair the annual “Rush City Spaghetti Days” festival for several years.

Upon arriving in Rush City, Margarette and Don joined Sacred Heart Catholic Church, where over the years she served on the church council, the Council of Catholic Women, and the fall festival committee, in addition to reading scripture, teaching catechism to high school students, and sewing altar cloths and banners.

For many years, Margarette also volunteered as an election judge and would often tell the story of counting paper ballots “all night long” in the close presidential election of 1960, in which her candidate, John F. Kennedy, won.

Margarette also had a knack for interior decorating. In the early 1970s, she started going to farm auctions to find “hidden treasures” and was continually redecorating the house with the antiques and unique items she found along the way. When money got tight, Margarette started working at the bakery and also became the city’s part-time librarian. After the bakery closed, she worked at the Historic Grant House in Rush City, making pies and other baked goods for the many tourists traveling up Highway 61 to the North Shore.

In addition to baking and reading, Margarette loved to sew, crochet, quilt, and do wool applique. For many years, she hosted a sewing group in her senior apartment in Rush City, and each Christmas her loved ones could not wait to see what stitchery they would receive from her.

Margarette filled her retirement years by working part-time in the high school library (one of her favorite jobs), enrolling in classes at Anoka-Ramsey Community College, traveling to India, Ireland, and Italy, and continuing her volunteer work. She loved volunteering at the Rush City Food Shelf, and in later years when she became too weak to lift the grocery bags, she still continued to volunteer there, doing more light-duty work. She also enjoyed getting together with her old friends from another organization she participated in over the years, the American Legion Auxiliary in North Branch. Margarette was an active volunteer right up until her death, cutting out obituaries for The Dragonfly Project, a grief-support organization, and sewing masks for the Lakewood Health System in Staples during the Covid-19 pandemic.
For more than thirty years, Margarette was also a participant in a long-term women’s health research study at the University of Minnesota, collecting data about her own health, as she overcame addictions to alcohol and cigarette smoking.

Throughout her 90 years of life, Margarette instilled in the people she loved the values of life-long learning, contributing to society by volunteering, respect for others different from ourselves, and enjoyment in creative hobbies.

She was preceded in death by her husband Don, who died in 1994.

Margarette’s family wishes to thank the wonderful hospice staff in Chisago and Todd counties and the health-care providers at Lakewood Care Center in Staples.

Drive-By Visitation with Margarette’s Family
Margarette’s children invite friends and relatives to participate in a “drive-by visitation” from 11:30 AM to 12:30 PM on September 10, under the Olson Chapel portico. Margarette’s family will be present outside to greet people in their cars. To keep everyone safe, the family requests that individuals participating in the drive-by visitation please remain in their cars and wear masks.

Live Broadcast of Margarette’s Mass of Christian Burial (Click Here)
Because of the Covid-19 pandemic, the Mass of Christian burial for Margarette will be private and take place on Thursday, September 10, at 1 PM, at the Olson Chapel in Rush City. Margarette’s family, however, invites friends and relatives to participate in the funeral service virtually by going to the site above where it will be broadcast live.

Memorials may be directed to the Rush City Food Shelf.

To order memorial trees or send flowers to the family in memory of Margarette Louise Brooker, please visit our flower store.