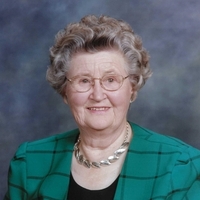 Marianne Klande of Pine City passed away Thursday, July 14, 2022 at Havenwood of Maple Grove at the age of 98.

Marianne was born in Lobarbek, Germany on August 8, 1923. She was the eldest of seven children born to John and Tine Fedder. In October of 1924 the Fedder Family immigrated to the United States passing through Ellis Island and then by train to Pine City where relatives had made arrangements for their arrival.

After renting farms around Pine City, the Fedder family purchased a farm northeast of town where Marianne remembers that there was no running water, no electricity and no indoor plumbing. Kerosene lanterns provided light for evening activities.

Grade school was a one room school house about a quarter mile from home. Marianne graduated from Pine City High School in 1940 and went on to Minneapolis School of Business and later worked for Minor Ford Company in Minneapolis. In 1942 Marianne returned to Pine City and worked for General Minnesota Utilities Company.

On September 30, 1944, Marianne married Richard Klande, her childhood sweetheart, and she moved a quarter mile to the Klande farm on Cross Lake. She would have to wait until 1952 before they were able to have running water and an indoor toilet. Their small dairy farm held many memories such as preparing huge meals for the threshing crew, clothes washing day on Mondays, frozen sheets hanging on the clothes line in winter, and kids playing with kittens in the barn.

Marianne was a lifelong member of Zion Lutheran Church in Pine City where she worked for several years as church secretary. She died in the blessed assurance of her faith in Jesus Christ and the confidence of eternal life.

She was preceded in death by her parents John and Tine Fedder; husband Richard Klande; brothers Henry Fedder and Adolph Fedder; sisters Katy Brackenbury and Elsie France; and brother John who died in infancy.

Reverend Glen Kleppe will officiate at funeral services for Marianne: 11 AM; Friday, July 22, 2022 at Zion Lutheran Church in Pine City. A time of visitation and reviewal is planned for one hour prior to the service at the church. The interment will take place in Birchwood Cemetery, Pine City.

To order memorial trees or send flowers to the family in memory of Marianne Klande, please visit our flower store.