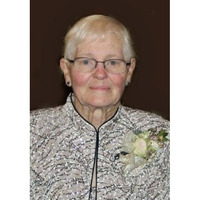 Marjorie "Marge" Steinbring passed away Saturday, October 15, 2022 at The Estates in Rush City at the age of 89.

Marge grew up in the Rush City/Rock Creek area and graduated from Pine City High School in 1951. After graduating, she moved to Minneapolis where she worked at Northwestern Bank for 5 years. On a weekend visit home, she met Harold Steinbring. They were married in 1955 and together raised two children.

When her children were grown, she enjoyed working as a bus driver for Hunt's Bus Company in Anoka. She took great pride in the fact that she missed just a single day of work in her 16 years with the company.

Marge enjoyed playing bingo, reading, mowing her lawn, and camping on Mille Lacs. She had a great love for her grandsons and great-grandchildren.

She was preceded in death by her parents Melvin and Cora McCormick; husband Harold Steinbring.

Funeral arrangements are entrusted to the: Funeral and Cremation Service of Rush City ~ Olson Chapel
www.FuneralAndCremationService.com

To order memorial trees or send flowers to the family in memory of Marjorie "Marge" Lou Steinbring, please visit our flower store.