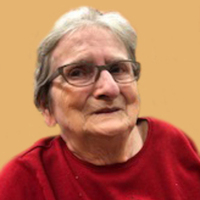 Mary Jane Miller was born April 16, 1937 to Anthony and Anna (Furtak) Miller in Park Falls, Wisconsin.  She attended and graduated from Butternut High School in Butternut, WI.  She grew up on a farm, sharing chores and farm work with her 6 siblings.

Mary met Bob Peterson through mutual friends and they were married on November 6, 1954.  After the births of her first children, twin boys, they moved to St. Paul, MN.  Mary was a homemaker and mom to several more children, having 9 children within ten years - which included two sets of twins.

Mary learned how to cook and bake from her mother-in-law.  And boy could she cook.  Every meal was a production when feeding this size of a family.  She excelled at cleaning, mostly after all the messes the kids made, and the millions of cloth diapers that were rinsed and washed after they were used.  And when disciplining the kids - the phrase “wait until your father comes home” was enough to stop most arguments and tussles.  When most of the kids graduated, and were out of the house, Mary and Bob moved back to their home state of WI, with their youngest.

Mary moved back to Pine City, MN in early 2011 after the passing of Bob, to be closer to her children.  Mary became a resident at St. Clare’s in Mora in 2013.  While there, she enjoyed playing bingo, putting together countless puzzles, and watching and cheering on the Minnesota Twins and Minnesota Vikings.

The family would like to thank the incredible staff at St. Clare Living Community and St, Croix Hospice for their compassionate care.

To order memorial trees or send flowers to the family in memory of Mary Jane Peterson, please visit our flower store.