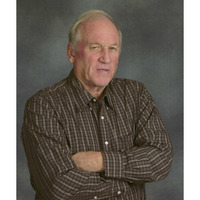 Mike was born in the Rush City Hospital on November 17, 1954 to Ronnie and Jean (Allen) Robinson. He passed away on January 23, 2022 at Ecumen of North Branch at the age of 67. He died 18 days following a diagnosis of cancer.

Mike attended both elementary school and high school in Rush City, graduating in 1973. While in school, he developed a passion for sports, especially football and baseball. He was named co-captain of his football team and lettered in baseball, football, and basketball all four years of high school. His enthusiasm for sports carried into his adult life as well. He played town team baseball for Rush City for several years and volunteered with the Rush City Athletic Association at home team football games for more than 35 years. He never missed the annual golf tournament which provided Rush City students free sports participation. He enjoyed watching his sons grow up in Rush City and enjoyed watching them participate in sports as well. He spent hours with his grandson Sonny and granddaughter Capri encouraging them to also love sports.

After high school, Mike received a two year business degree from Lakewood Community College and became a much admired and respected citizen of Rush City. He served on the volunteer fire department for 16 years, the town council for 10 years, and was Chisago County District 5 Commissioner for 20 years. As a county commissioner, Mike fought hard to bring county dollars to the northern part of Chisago. He advocated for road repairs, helped people with property concerns, and had a hand in many business developments in the county. He always enjoyed coming up with county budget solutions. His advocacy for fairness helped his district get the attention it needed. Mike was also good at encouraging others to move forward in their careers using him as a referral. He earned the respect of his county board colleagues for having good business tactics and common sense.

Mike’s occupations included working at the ammunitions plant in Ramsey County right after high school, hauling milk for the Rush City Creamery, driving trucks for Lofgren Trucking, McDonald Distributing, EC Pallet in Rush City and Grosslein Beverages, Inc. in Anoka. At Grosslein, Mike made lifelong friends, and they still consider him one of the gang. He later worked at the Bulrush Golf Course taking pride in maintenance of the greens.

Someone that Mike really adored was his cousin Ruth Robinson Duccini. She was a very tiny person who became a Hollywood actress. Her most famous role was as a munchkin in “The Wizard of Oz”. He and Elaine visited Ruth many times in Las Vegas, and they developed a wonderful relationship that Mike truly treasured.

Most of all, Mike will be missed for his humor, friendship, and ability to make people feel comfortable. He was a great storyteller and brought lots of laughter to meetings, parties, and cribbage games. He never hesitated to invite friends to his picnic table or his basement “Mike’s Bar” for relaxing, telling jokes, and enjoying a cold Miller Lite.

Mike was preceded in death by his parents and brother-in-law Darrell Nihart.

Pastor Nathan Baker-Trinity will officiate at funeral services for Mike: 10:00 AM; Friday (February 4, 2022) with a visitation Thursday evening from 5-8 PM all services at the First Evangelical Lutheran Church of Rush City. The interment will take place in the First Lutheran Cemetery, Rush City.

Besides attending Mike's funeral in person, it will be live streamed on the church website (please click here then click WORSHIP ONLINE) and/or can be listened to in the church parking lot. Please pull up to the church entrance for a funeral bulletin which will list the radio station frequency.

To continue celebrating Mike’s life, a gathering of food and fellowship will take place upstairs at the Rush City VFW.

In lieu of flowers, memorials may be directed to: Rush City Schools and can be dropped off at the visitation or funeral or mailed to Robert Schlagel, 585 West 2nd Street, Rush City, MN 55069.

To order memorial trees or send flowers to the family in memory of Michael "Mike" Dean Robinson, please visit our flower store.