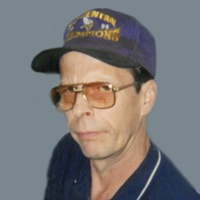 Michael Miller of Hinckley passed away at his home on Monday, July 31, 2017 at the age of 63.Michael Howard Miller was born September 29, 1953 to Arvil and Ruby (Guimont) Miller in Minneapolis, Minnesota.   While growing up Mike lived and attended school in Fridley, Minnesota.  In 1971, he graduated from Fridley High School.  On August 2, 1975 Michael and Cynthia "Cindy" Katzmark were married. Over the years Mike worked for the International Brotherhood of Electrical Workers and Burlington Northern Railroad.  He was a painter and a builder.  For the last 25 years Mike was employed by Hinckley Grand Casino as a dealer supervisor. Mike liked fishing, bowling, baseball and camping.  He enjoyed completing puzzles, watching the birds, caring for his feral cat families and he was an amazing pumpkin carver.  Mike loved his family to the moon and back.  He will be forever missed! Mike is survived by his wife Cynthia Miller; son David Miller; daughters Lisa (Derek) Schultz and Joleen Miller; brother Gary (Denise) Miller; sister Suzanne Miller; grandchildren Devin Schultz, Nicole Schultz, Joseph Miller, Jessie Miller, Jeffery Rush and Laura Rush; great-grandchildren Malachi Schultz and Amelia Schultz. He is preceded in death by his parents Arvil and Ruby Miller and grandson Casey Jo Miller. A memorial visitation for Mike will be 6-8 PM; Thursday (8/3/17) at the Swanson Funeral Chapel in Pine City. Funeral arrangements are entrusted to the: Funeral and Cremation Service of Pine City~Swanson Chapel.  www.FuneralAndCremationService.com
To order memorial trees or send flowers to the family in memory of Michael Howard Miller, please visit our flower store.