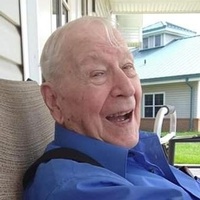 Bob was born March 22, 1922 in Kenyon, Minnesota to Robert and Stephanie (King). The family moved to Rush City in 1932 at the height of the Depression, but God was gracious and provided work in a feed mill, on the family’s new farm south of town, and later through an International Harvester dealership. Bob started working for his father by fixing motors and driving truck. He did that until he enlisted in the Army Air Corps in 1942. A love affair with the skies began. Bob missed being a POW due to one shift of guard duty. His crew was shot down. In August of 1945, he tried to do an inspection on a plane in California but was not allowed near. He found out a few days later it was the Enola Gay.

After the war, Bob fell in love and married Rosemary Studt of Greeley in 1947. The couple settled in Rush City and welcomed their daughter Linda five years later. They made Rush City their home the rest of their married life. Bob supported his family as a truck driver and was still driving an 18-wheeler at the age of 83! In 2007, Bob moved to Texas to be closer to his family. He got so much joy out of them. For the last few months, his residence was a veterans’ home in Bonham.

Everyone always had a good word to say about Bob. He was friendly and eager to be helpful – especially in things mechanical. His grandchildren described him as “never too busy.” He loved life and his family.

In his later years, his relationship with Jesus deepened. Bob read his Bible cover to cover every year – a portion at a time - and became a real prayer warrior. He prayed every night for his family and this nation. Hearing his prayers provided a sense of comfort and safety – the greatest legacy a father can give. A godly heritage is a mighty thing and hard to escape.

Bob is survived by his daughter Linda Rice of Denison, TX; his grandchildren: Cody (Jean) of Washington, DC, Martha (Aaron) McGuire of Houston, Bobby (Lisa) of Denison; 6 great-grandchildren; his sister Margery McCluskey of Wisconsin; and many nephews and nieces.

He is preceded in death by his beloved wife Rosemary; his parents; and his brothers Peter and Paul.

Bob’s family will gather August 10th at 2:00 PM at Olson Chapel for a short memorial service followed by interment to place his ashes beside his wife Rosemary at the First Lutheran Cemetery east of Rush City.

To order memorial trees or send flowers to the family in memory of Robert "Bob" Howard Odegaard, please visit our flower store.