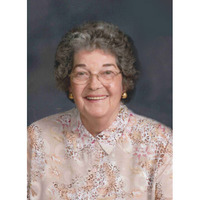 Sylvia Alice West was born April 25, 1931 to Arnold West and Anna (Wing) Hellstrom in Medicine Hat, Alberta Canada. They moved to Minnesota when she was about 3, which is where the rest of her siblings were born. She graduated from Rush City High School in 1949, so her class was always know as the “49ers.” After high school she moved to Minneapolis and worked at a drug store. While in Minneapolis, she met and married Kenneth Brown, and Linda was born in August 1954. After her first husband passed away from cancer in 1958, she and Linda moved back to Rush City. The next year, she met and married her second husband, Mike Hudak, on August 22, 1959. They had 3 children—Steve in April 1961; Michelle in January 1963; and Kristi in September 1965.

Sylvia worked at the Pine County Auditor’s Office from 1971 until her retirement in 1994. After that, she spent time with grandchildren and traveling with Mike and friends. On February 15, 2016, she moved into Ecumen North Branch, and lived there until she passed away on February 6, 2022 at the age of 90.

Monsignor Aleksander Suchan will celebrate a Mass of Christian Burial for Sylvia: 10:30 AM; Wednesday, February 16, 2022 at the Immaculate Conception Catholic Church in Pine City.  A time of visitation and reviewal is planned from 5-7 PM; Tuesday (2/15) at the Swanson Funeral Chapel in Pine City and also one hour prior to the Mass in the St. Anthony Commons area at the church.  The interment will take place in Calvary Catholic Cemetery, Pine City.

To order memorial trees or send flowers to the family in memory of Sylvia Alice Hudak, please visit our flower store.