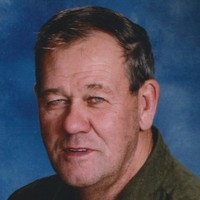 Vernon “High Pockets” Boeck of Greeley went home to his Lord on Friday, October 25, 2019 at Abbott Northwestern Hospital in Minneapolis at the age of 72.

Vernon Harry Boeck was born February 15, 1947 to Harry and Hazel (Lund) Boeck in Rush City, Minnesota. He had 3 older sisters and was raised on the family farm in Greeley where he spent his entire life. He was always proud to tell everyone that he never left home.

In 1965, Vern graduated from Rush City High School and had already been working at the Greeley Creamery dumping milk for area farmers.

Vern worked a variety of jobs from driving school bus routes, over the road Miller assistant at Amber Milling and most recently for Home and Away Ministries. His biggest passion was the farm and looking after his cattle operation.

Vern loved his grandchildren and was especially happy to take them on the 4-wheeler to see the new calves when they were born and finding new batches of kittens in the hay barn. He was a social butterfly and could visit with strangers like they were old friends.

He was preceded in death by his parents Harry and Hazel Boeck; sister Dorothy (Jerry) Thoney.

Pastor Julie Beck will officiate at funeral services for Vern: 11 AM; Saturday, November 2, 2019 at the Braham Evangelical Lutheran Church. A time of visitation and reviewal is planned from 5-7 PM Friday (11/1) at the Olson Funeral Chapel in Rush City and also 1 hour prior to the service at the church. The interment will take place at First Lutheran Cemetery in Rush City.

Memorials may be directed to the Salvation Army.

To order memorial trees or send flowers to the family in memory of Vernon "Vern" Harry Boeck, please visit our flower store.